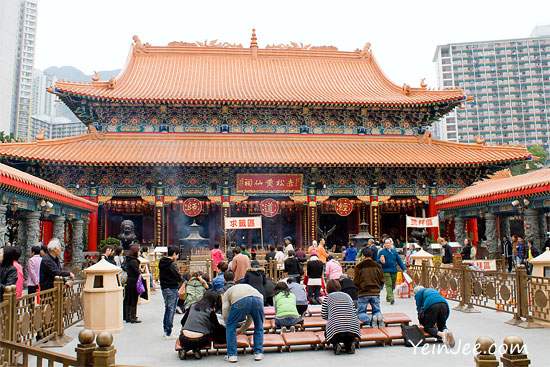 Wong Tai Sin Main Temple. Note that devotees light and pray outside of the temple. This is to protect the temple from being destroyed.

People go to Wong Tai Sin Temple to pray everything and anything under the sun, and the temple can get a little crowded especially on Sundays. Whenever I’m in HK I always make sure that I visit Wong Tai Sin Temple and pray for different things. Most of the things that I prayed for get answered.

Wong Tai Sin Temple is really more than just a temple; it’s a compound composing of different shrines and/or temples. There are also various walls with arts that have religious significance.

Wong Tai Sin is a popular Chinese Taoist deity who was born as Wong Cho Ping. 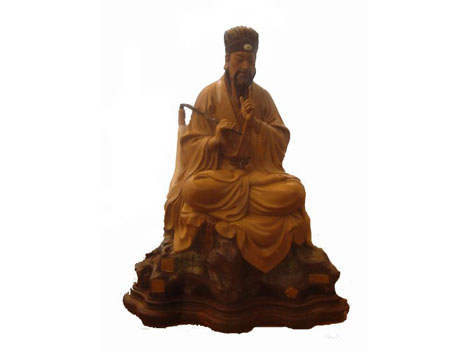 Image of Wong Tai Sin. Notice that he has a resemblance with one of the Eight Immortal – Lu Dong Bin.

Wong Tai Sin directly translates as the ‘Great Immortal Wong’, and he is known for his healing abilities, thus he is largely considered as a god of healing, although, in truth, people go there to pray for anything and everything that bothers them.

Not much is known about Wong Tai Sin’s mortal being Wong Cho Ping. However, it is said that he was born poor and started working as a shepherd at a young age of eight years old. According to the few books that survived that talks about Wong Tai Sin, Wong Tai Sin became an immortal at about the age of 55, this was after he met an immortal 40 years earlier who supposedly saw the purity of Wong Tai Sin’s heart and decided to give him the secret to being an immortal. He supposedly attained his immortality at the Red Pine Mountain. Before he became an immortal it is said that he is able to transform stones into sheep. However, it is not clear why would there be a need for him to transform stones into sheeps.

Wong Tai Sin temple is a shrine, which happens to be a major tourist spot, in HK that is dedicated to Wong Tai Sin. It was said that Wong Tai Sin himself chose the place of the shrine by revealing it to an enlightened Taoist priest. Before the shrine or temple was built in its current location, it used to be in a house near the current shrine. In the older shrine, it is said, is where Wong Tai Sin created a lot of his miracles and gained a big following and popularity.

The main temple or shrine, which is also the biggest in the whole compound, is dedicated to Wong Tai Sin. 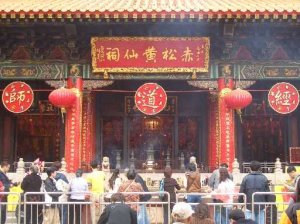 Wong Tai Sin Main Temple, which is the shrine for Wong Tai Sin or Wong Cho Ping. The devotees light their incense outside the temple. They usually put some tent when it rains. Picture lifted from google images.

However, the government has decided to keep it off limits because believers would always want to touch the image of Wong Tai Sin, thus damaging some parts of the image and of the interior of the temple.

Beside the main temple is the Three-Saint Hall that houses the image of Kuan Yin, Kuan Kong, and Lu Dong Bin. However, like the main hall, this is also off limits from the devotees. There is also a Nine-Dragon Wall, which is copied from the Forbidden City in Beijing. 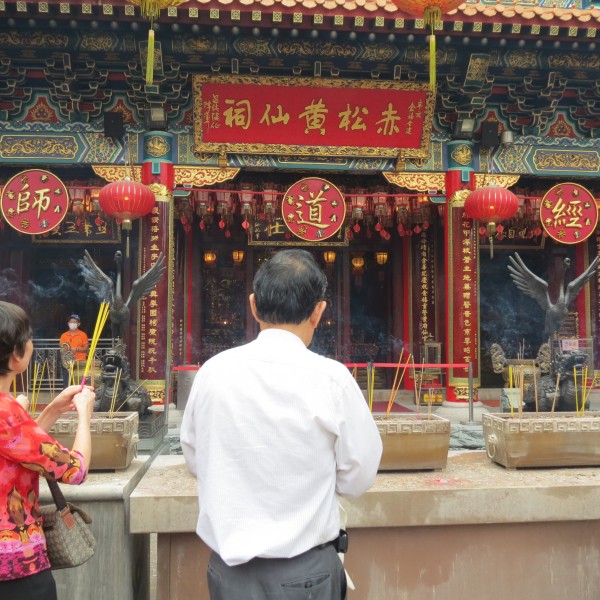 Outside the Main Temple 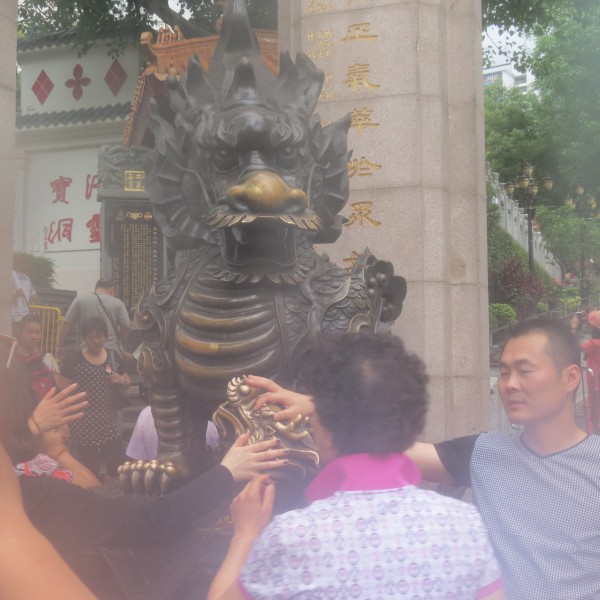 There’s a pair of Piyao at the entrance of the temple. Hong Kong Chinese and Mainland Chinese rubs their hand against the Piyao of the temple. Depending on what part of the Piyao it may give you protection, wealth, and/or good health. Rubbing the dragon as shown in the picture will give your protection and good luck. 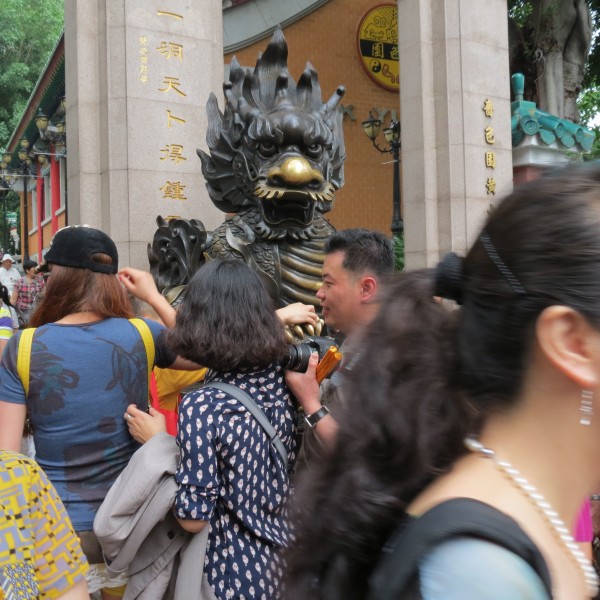 The other side of the entrance where the other Piyao is located. People are also rubbing this Piyao. 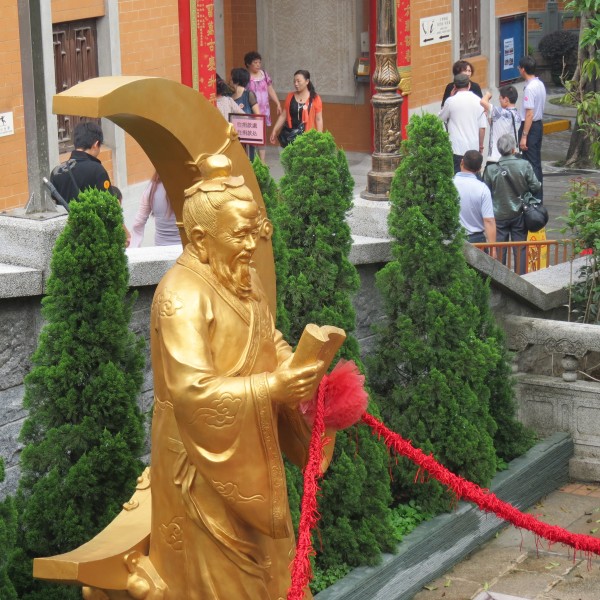 One of the first thing that will greet you upon entering the main entrance, just before you go up to the main shrine, is the image of Yue Lau or The Old Man in the Moon who is a Taoist God that helps singletons look for their partner in life. 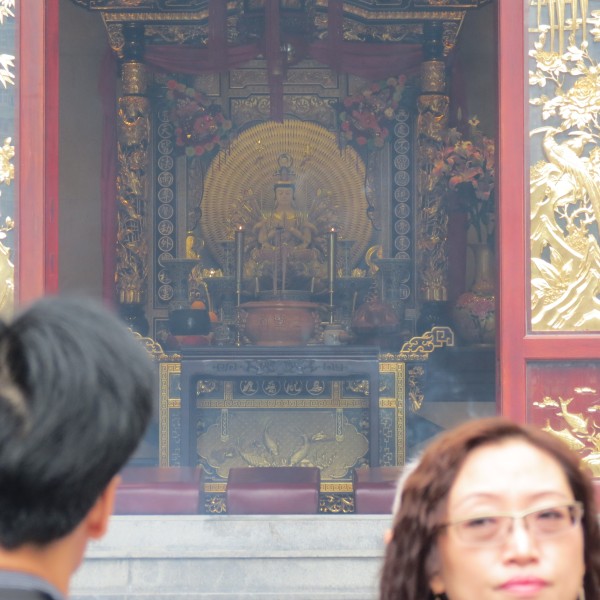 Seen from the outside of Three-Saint Hall is the image of Kuan YIn, on her right is Kuan Kong and to her left is Lu Dong Bin. I’m unable to get a better picture because the hall is also off limits to devotees. If you notice, although the image is simply called Kuan Yin, it really is a manifestation of the Thousand-Hand Kuan Yin. 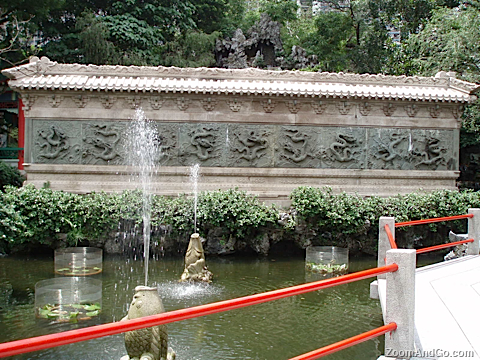 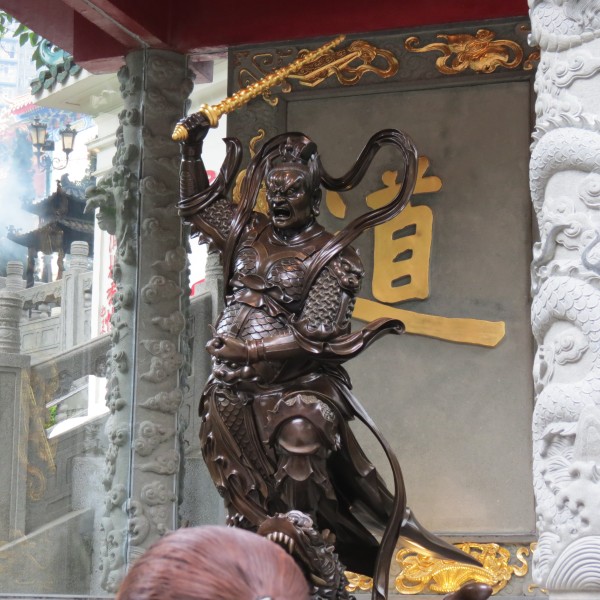 All throughout the temple compound, you’ll see different images or statues of Taoist gods. 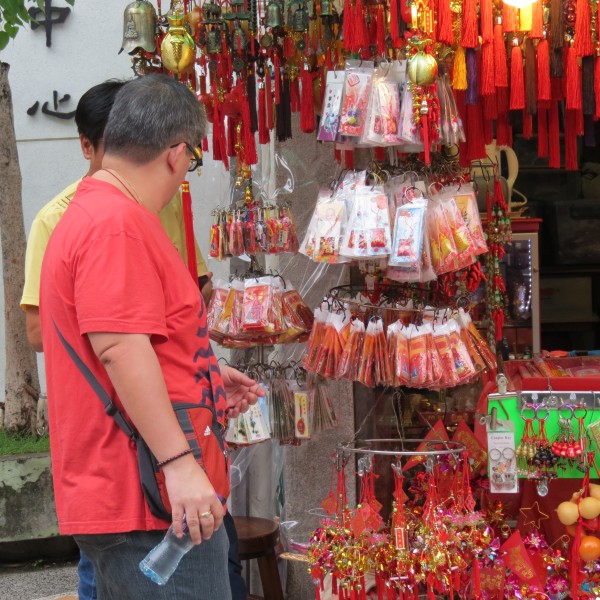 Just before you enter the temple, there are a lot of stalls that sells Feng Shui and Taoist amulets. You can get different Wong Tai Sin amulets just before you enter the temple. Just make sure you haggle the price. When I first ask as to how much is the Wong Tai Sin Amulet, the seller said it’s HK$20.00. Told him I’m not willing to spend more than HK5.00 for each of the amulet. I was told that they don’t have anything below HK$10.00. I then insisted that my budget is only HK$5.00. I was then told to leave and not waste their time. I then started to leave, after which the seller ran after me and said just because I’m a foreigner he’ll give it to me for HK$5.00. 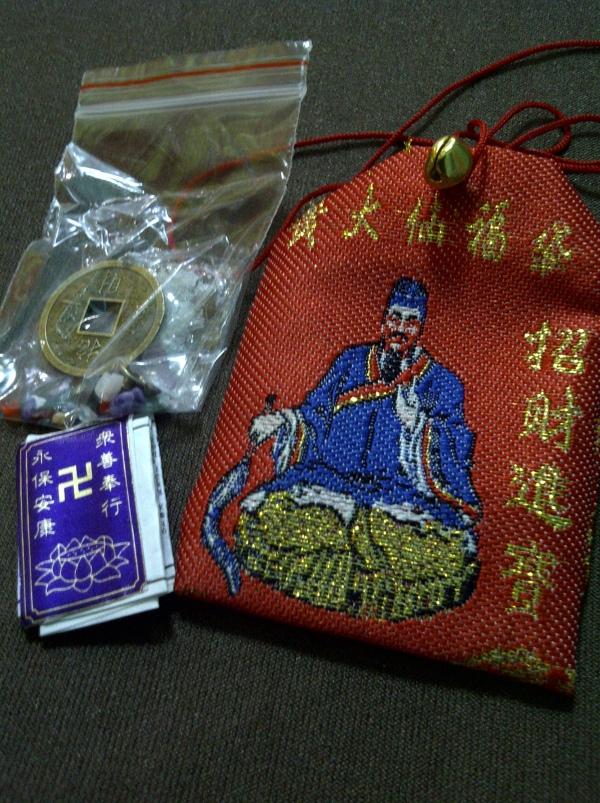 I got several Wong Tai Sin Amulet. Please note that there are different kinds of Wong Tai Sin amulet, some are for wealth, health, safety, etc. The one in the picture is wealth enhancement amulet. The pouch has an image of Wong Tai Sin and you’ll put the ‘sutra’ or prayer book inside, with the lucky coin, and crystal chips. Once inside let it pass the incense smoke three times. If you’re left handed do it clockwise, if right handed do it counter clockwise.