Recently a Christian friend believes in Feng Shui ask me whether what do I think is the basis of the Christian rule that states that – THOU SHALL NOT MENTION THE NAME OF THE LORD THY GOD IN VAIN. 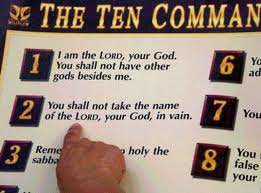 This got to me thinking, but it was then I realized that I will never mention the noun Buddha, or Bodhisattva or Kuan Yin, etc. just because I feel like mentioning them. For me it always has to be in the context of a real conversation and never in a joke.

I called up my Feng Shui teacher who is also a practicing Taoist and Buddhist. He explained to me that mentioning the name of the Lord or God, whether your Lord or God is Allah, Jesus Christ, or Buddha in vain creates a lot of negative karma because this shows a total disrespect to THEM.

But what is in vain? It’s easier to site some example rather than explaining it. So here are some of the examples.

Saying – OH MY GOD! – although you didn’t specifically mention Buddha or Jesus Christ, or Allah, by saying God in reference to your God or Lord is tantamount to mentioning His name in vain.

Saying the name of the LORD or GOD in the context of insulting a person or threatening a person is another example of mentioning it in vain and earning a person a thousand fold of negative karma. Another example – THE LORD IS GOOD AND JUST. HE WILL PUNISH THOSE WHO DESERVED TO BE PUNISHED! – again this statement although true obviously is used negatively.

Bad family life. According to my guru Lama, there is this Buddhist woman who used to drop the name of Buddha as if Buddha is her personal soldier. When she doesn’t like what a person did she would say – BUDDHA IS GOOD. WE WILL SEE IN THE FEW MONTHS OUR KARMA. Unfortunately, although she continuously to be well off, her family life became really bad. Her grown up children don’t care for her. Her biggest stumbling block to achieving real happiness is her own mother. Furthermore, her husband left her, and while she has another partner, the guy was a source of burden to her because he was unable to fully commit to her. She’s always afraid that he might leave her like what he did to her before! After several split up, the guy found his ‘true love’ and left her permanently!

So remember, do not mention that name of the Lord thy God in vain. And again, whether your Lord or God is Buddha, Allah, or Jesus Christ!