Today is a very good day and an exciting day (please note that actual writing and date of posting are usually different from each other) for me and in a way for my regular readers and believers of Feng Shui and Buddhism it should be a good day for you also, because today is the day I was told by my Guru Lama to share with you about the Four Heavenly Kings.

From this we can see that the Four Heavenly Kings are powerful protector Buddhist gods, however, as you read on you will that they don’t only protect us but they each also have a specific function which is different from each other.

At this point, I would like to clarify that the Four Heavenly Kings are gods in the Buddhist pantheon; it means they are not yet Bodhisattvas or Buddhas, and they serve the Buddhas or Bodhisattvas.

Again, The Four Heavenly Kings are Buddhist gods, each of who watches over their assigned cardinal direction of the world. The cardinal directions are East, West, North, and South. In Chinese they are originally known or called as “Fēng Tiáo Yǔ Shùn” (風調雨順), which literally translates to “Good climate”, but in the translation in the Chinese version of sutras they are called “Sì Dà Tiānwáng” (四大天王) which means “Four Great Heavenly Kings”.

In most Chinese Buddhist Temples, one will normally see the THE HEAVENLY KINGS HALL. This is usually one of the first most majestic halls one will see.

The Four Heavenly Kings resides in Mt. Sumeru, a celestial and cosmic mountain where the heavens are. They are also the protector of the world and they fight evil, each of the 4 Heavenly Kings are able to command a legion of supernatural creatures to protect the Dharma or people who follow the Dharma.

Each of the Four Heavenly Kings serves Sakra, the of the devas (gods) of the Trayastrimsha Heaven. In Buddhism there are many heavens, and the Tranyastrimsha Heaven is the heaven nearest to our world, which is called Jambvudpiva is Buddhist sutras.

VAISRAVANA (He Who Hears Everything)

VIRUDHAKA (He Who Causes To Grow)

DHRTARASTRA (He Who Upholds the Realm)

VIRUPAKSA ( He Who Sees All)

Guru Lama shares with me a story about how when he was assigned by the Dalai Lama to leave Dharamsala, India to help spread Buddhism and build temple in other parts of Asia, he has personally tapped into the blessings and power of the Four Heavenly Kings.

That was a few decades ago and when he left India, he was only given small amount money to travel and spread the Dharma and eventually build a temple. Guru Lama said he was a little apprehensive because a few years back they just left Tibet because of Chinese oppression, and when he was asked to leave again to spread the Dharma, he was apprehensive and really nervous even though he was excited and felt honored to be entrusted with the task of spreading the Dharma.

A few months before leaving India, he started preparing himself physically and mentally to this overwhelming task. He would always meditate on the teaching of the different sutras and would always draw strength from Bodhisattva Avalokitesvara (aka Kuan Yin, Quan Yin, Guan Yin, Kuan Shi Yin, Quan Shi Yin, Kuan Shi Yin, Chenrezig, Kannon) and Bodhisattva Vajrapani. One night in his sleep he received a vision that Vajrapani Bodhisattva visited him and that he was shown the images of the Four Heavenly Kings. Upon waking up he knew then that he would need the help of the Four Heavenly Kings to help progress in his endeavor.

This totally make sense, because if you go back to the description of the Four Heavenly Kings, he will need wealth and prosperity to help build a temple, success and progress so that people will see the good side of what he was about to do, peace and harmony so that he can transmute that feeling to the people around him, good health for this overwhelming task, and protection to ensure that he doesn’t come to harm’s way in spreading the Dharma.

And so my Guru Lama started worshipping and praising the Four Heavenly Kings by making offerings to them and by chanting the mantras of the Four Heavenly Kings. He also vigorously recited The Golden Light Sutra, and The Lotus Sutra (full title is called “Sūtra on the White Lotus of the Sublime Dharma”). And the rest is history. According to Guru Lama he was able to become an instrument into building a temple and building a Sangha (Buddhist community) with relative ease. Money for the temple just kept on pouring in.

Note: To this day Guru Lama still actively participate in building temples. The stipulated donation from the amulets goes to the feeding of the monks or building temples or making of images of Buddhas or Bodhisattvas.

And so today, again for the first time, I want to share with you a powerful mantra that will help you attract wealth and prosperity, success and progress, peace and harmony, lastly, good health and protection, you can recite the mantras of each of the Four Heavenly Kings.

Here are the mantras of each of the Four Heavenly Kings:

While we won’t be able to recite the entire mantras daily, because some of them are long and there are really a lot of mantras available for us. Chanting daily mantras of selected Buddhas or Bodhisattvas will also make us, as mentioned earlier, more attuned with the cosmic energy, to the divine cosmic energy of the world of the Buddhas and Bodhisattvas, in such a manner that when we have to chant a specific mantra for a specific purpose, because we already have a ‘relationship’ with the divine cosmic energy, it is easier for us to be attuned to the energy of the new mantra we are chanting, even this is for only a specific purpose.

Yesterday, I shared with you the initial list of the mantras I chant daily. Namely of the 3 main Buddhas of our time and they are Amitabha Buddha, Shakyamuni Buddha (Sakyamuni Buddha) and the only celestial Buddha among the three, Medicine Buddha.

Today, allow me to share with you the other mantras that I chant everyday. They are 4 Main Buddha of Chinese Buddhism, especially for Pure Land Buddhism and Zen Buddhism.

Note: Zen Buddhism although has Japanese name actually started in China. It’s the English-speaking world that ‘popularized’ Zen Buddhism, but in reality it is called Chan Buddhism.

THE 4 MAIN BODHISATTVAS WHOSE MANTRAS I CHANT EVERYDAY ARE THE FOLLOWING: 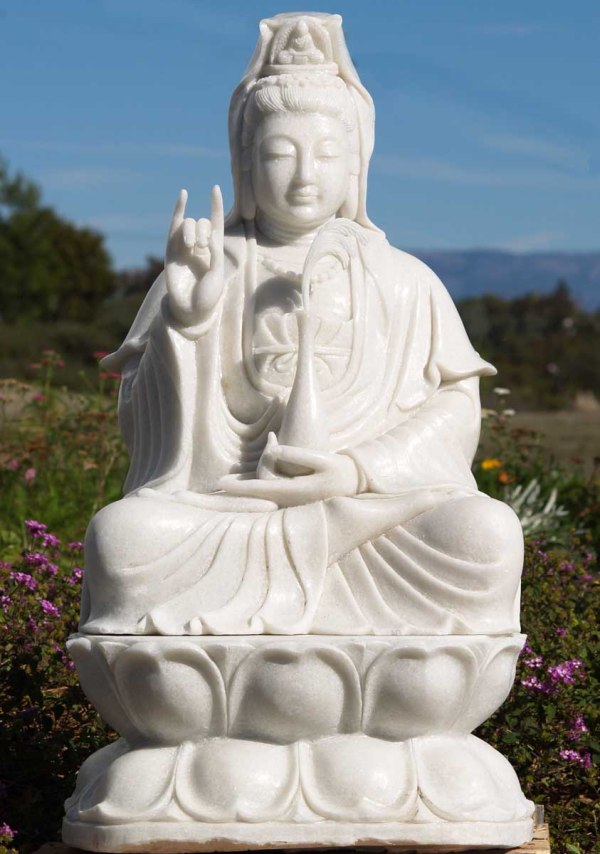 So you see, aside from the mantras of the 3 main Buddhas of our time, I also chant the mantras of the 4 main Bodhisattvas of Chinese Buddhism. But that’s not all, in my succeeding posts, I will share with you the other mantras I chant everyday.

You can also read other posts in the Chant – A – Mantra series:

I just shared with you why Chung Kwei is considered as the ultimate protector from evil spirits, demons, and hungry ghosts, and their ill effects with the post entitled – THE FASCINATING STORY OF CHUNG KWEI, THE ULTIMATE CATCHER AND VANQUISHER OF DEMONS, GHOSTS, AND EVIL SPIRITS!

Chung Kwei (also spelled as Chong Kwei, Chung Kui, Chong Kui, Zhong Kwei, Zhong Kui, Zhung Kwei, and Zhung Kui) is usually depicted as an extremely ugly deity. He can be considered as a wrathful god, which is usually how protector gods are depicted. His face is also usually really dark if not black, and he usually has beard. He carries a sword that he use for battling demons and evils spirits and a magical fan, which he uses to ward of hungry ghosts or ghosts. However, it is said that his face alone is enough to ward of any evil spirits that is why it is not surprising to see some pendants that simply features his face. Sometimes, he is featured with a red bat, which symbolizes that he is capable of bringing good fortune through scholarly approach. This is because he is a highly learned man when he was still living.

It is also advisable to wear an image of Chung Kwei as a pendant. Wearing his image as a pendant will ensure your protection. I always wear my Chung Kwei black jade pendant whenever I travel and I usually hang it beside my bed when I sleep, especially, if I suspect the hotel room where I’m staying is a Yin room.

However, there are some guidelines when choosing your Chung Kwei.

In choosing an image of a Chung Kwei for your home or office, it is important that:

In choosing a Chung Kwei pendant, it is important that: 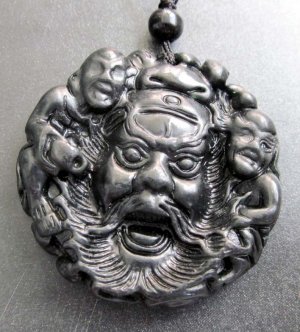 This particular Chung Kwei pendant features only the face. Notice the 2 little devils besides him with fearful face, it represents the first devils that Zhong Kui vanquished!

The problem is it’s quite difficult to get an image of Chung Kwei either as a pendant or as statuette, unless, you’re from Malaysia and Singapore. In the Philippines, I’ve only seen one or two stores in Chinatown in Binondo that sells good statuette of Chung Kwei. I now have only one piece of the statuette that I got in Singapore that I can dispose of. It is even harder to find a good Chung Kwei pendant, again, unless, you travel to Singapore, Malaysia, or Hong Kong.

This is a rare black jade pendant image of Chung Kwei. Was fortunate enough to find one in Beijing, China in a small shop.

Blessing an image of a Chung Kwei:

YOU MAY WISH TO READ THE FOLLOWING ALSO:

OR YOU CAN CLICK ON THE CATEGORY – KUWENTO TUNGKOL SA HUNGRY GHOST MONTH.