Several posts ago entitled – AURALITE: A GIFT OF LIGHT FROM A READER – I talked about how one reader, Atty. B, gave me a wonderful that I also need at that the time the gift was given to me. In that particular post, I mentioned that another reader has given me a very wonderful gift. The gift that was given to me is a Stupa!

AC contacted me because she wanted to get the WISH FULFILLING AND BUDDHA’S BLESSING MANTRA PENDANT, this led to a series of email conversations and she really did give me an impression of being a very kind person. In one of her emails she inquired about getting a Stupa as somebody in the temple that she attends to offered this to her. I told her owning a stupa is such a wonderful blessing, especially if this was blessed by a high-ranking lama like Lama Zopa Rinpoche. She ended up acquiring the Stupa and what’s more her very kind heart and generosity prompted her to get one more for me to be given as a gift!!!!!

As mentioned before, receiving amulets or holy objects as a gift does not make it holier or more powerful, but the act of receiving a gift makes the object comes with an auspicious chi brought about by the giver’s generosity.

Even if I put her generosity aside simply having a Stupa is such a wonderful blessing, and words won’t be able to convey how happy and blessed I feel to have receive that gift from AC. I can’t imagine how much blessings I’ll receive because of the Stupa. In fact, I’m sure even my friend and reader, DU, who was the middle person to get the Stupa from AC and to give it to me will definitely have received some blessing simply because she held it and having it in her possession. 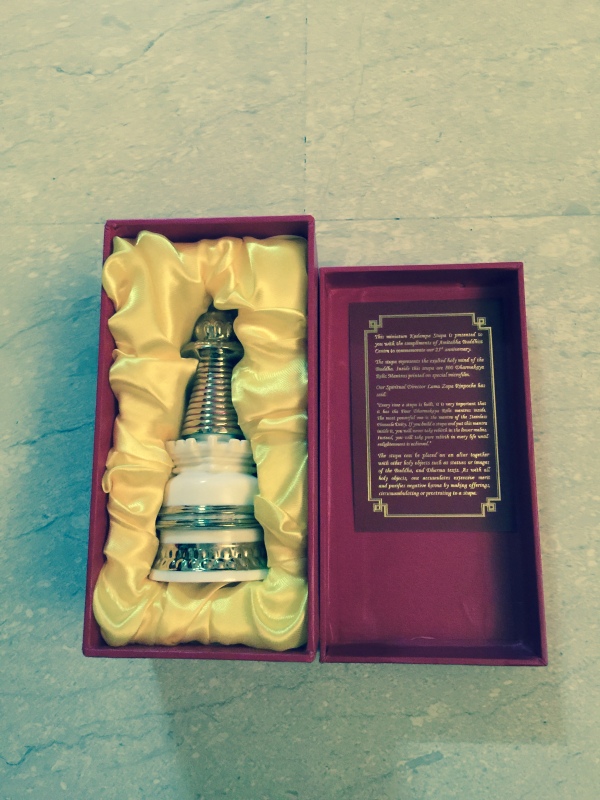 This is the stupa that AC gave me.

I thought I’d show my gratitude to AC by asking my Guru Lama whether I can invite a Vajrapani Ruel(1), which is considered as one of the most powerful if not the most powerful amulet in Buddhism, in behalf of AC and I’m really happy that my Guru Lama agreed and told me to go ahead with it. AC herself has expressed gratitude in advance for the Vajrapani Ruel(2), which has had enjoyed some personal testimonies already.

But why am I so excited about the Stupa? Not only because it was a gift from a reader but also because it is a Stupa!!! I think I should make myself clearer. Allow me to tell you first what is a Stupa and what are the blessings that it can bestow.

A stupa, which is pronounced with long U sound, is almost similar to a pagoda but is more mound – like and/or hemispheric structure that contains one or more Buddhist relics. A big stupa will usually contain a relic from a high-ranking Buddhist monk, usually a green, or red, or white, or yellow pearl – like object produced by high-ranking lamas when they are cremated. Surprisingly, people who are holy only produce these pearl – like objects. A layperson may produce this also and becomes an indication of the goodness of the person’s heart.

It is believed that Shakyamuni or the Historical Buddha’s body was cremated and the ashes were divided into equal parts and which was put inside 8 different stupas. Two additional stupas were further made for the temporary casket that was made for the Buddha and for the left over embers. However, these stupas were not identified.

All stupas represent the Buddha with his crown of enlightenment and in meditative lotus seat position.

The ubiquitous Five Element Pagoda, which is a very famous and effective cure for the Five Yellow Killing Star or the #5 Flying Star is actually patterned after a stupa and not a pagoda. Pagoda was used to make it more familiar with the majority, because a stupa is somewhat limited to Buddhists. The difference between a stupa and a pagoda is that a stupa houses relics and is considered a very holy structure. A pagoda may or may not be a religious or spiritual structure, and while it may house holy images, it doesn’t have relics.

Building a stupa is not an easy matter. Obviously, in modern times you’ll need the skill of an architect and an engineer, but it is impossible to build a stupa without the leadership of a monk who is familiar with building one. There are a lot of empowerment ceremonies, Buddhist texts transmissions and ceremonies for one to build a stupa. And the most important component is the presence of a relic. In the absence of a physical relic, the Four Dharmakaya Relic Mantras, which are considered as a first class relic because it is said that it was the Buddha himself of wrote those particular mantra are put inside the stupa. All small and multiple – produced stupas, like AC’s gift for me, will have the Four Dharmakaya Relic Mantras. It is highly considered immoral to own a physical relic for oneself. Because it should always be shared thus it is always put inside a stupa or hidden in temples. Most Buddhist temples will also have the stupa easily accessible so people can circumambulate around it, if space is of a concern, thee stupa is put on top of the structure so that everyone who passes under it will be blessed.

The different kinds of stupa are:

In Tibetan Buddhism, these different kinds of Stupas are further, sub – categorizes into the 8 different types, which is called the Eight Great Deeds Stupas, which are base on the different events in Shakyamuni Buddha’s life.

The Eight Great Deeds Stupas are the following:

Much later, another kind of Stupa came out of Tibetan Buddhism, which is the Kalachakra Stupa. It has nothing to do with the Buddha’s life as represented by the other Stupas, but rather it is a symbolism of the tantric practice of Kalachakra. This particular stupa is said to be able to double the protective energies of the other Stupas as enhanced by a Kalachakra symbol.

The image below will show the images of the different Stupas, but it has to be noted that these are just the basic image, for example as Lotus Blossom Stupa may look a little different from one another. The stupa that AC gave me is a Stupa of Nirvana. 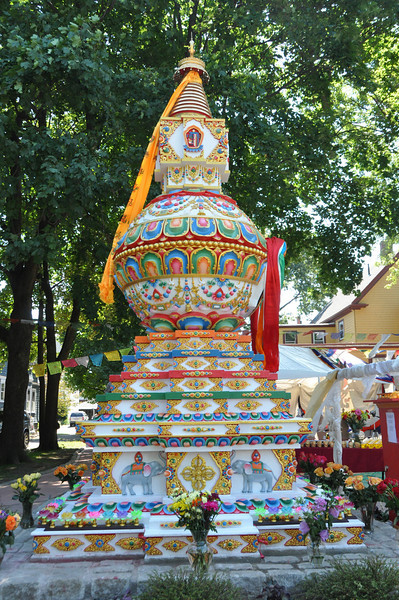 A sample of a Kalachakra Stupa

Simply seeing, being around or owning a stupa will give you a lot of blessings, more so if one circumambulate or prostate around it. Allow me to share some of them here:

More than the above mentioned benefits it also helps establish peace and harmony.

It is said that when a wind touches or passes through a stupa it temporarily becomes a holy wind, and has the ability to give blessing those who are ‘touched’ by the wind, even if they don’t believe in Buddhism.

I took the liberty of copy – pasting below the text from a talk given by Lama Zopa Rinpoche about the stupa. But before that I again would like to thank AC for the wonderful gift and for the wonderful blessings that comes with it! It’s more than just a Buddhist gift; it’s a gift of good life!!!!