This photo was uploaded from Google images.

Last year, when I started my blog, and started writing about 2012’s Feng Shui forecast, I only focused on the Flying Star aspect but this year, I thought I’d also discuss about it’s BAZI / Paht Chee / Four Pillars.

I’m happy to share that this year’s Bazi is one of the most ideal Bazi for a long time. I say ideal because it has a complete set of elements. FIRE, METAL, WATER, EARTH, WOOD are all present in the chart. But more than that, the year’s Flying Star positions are back to its original Lo Shu with five (5) in the center, and this only happens every 9 years. Why does it matter? It’s important to note this because it means that all animal signs are influenced by their original essence.

But before I discuss about the Flying Star, I would like to focus first on what we can ‘predict’ about the year if we derive it from this year’s Bazi.

First, let’s focus on it being a well-balanced chart. What does this mean? This means that almost all animal signs will have get some fair chance in life or in having good luck. There will also be a lesser degree of natural disasters.

For those who have consulted with me or are familiar with Bazi or Paht Chee, you would know that what’s really defines a person is his or her self – element which is define by the heavenly stem of the day pillar. It’s also true for the year, what really defines the year is its self-element. And the self – element of the year 2013 Year of the Water Snake is Yin Metal. And since the earthly branch of the day pillar is also Earth, which produces Metal in the Feng Shui cycle of elements, this means that this year will bring the power or energy of resources. Again, this means, even all countries, all corporations, all individuals will be given the resources to have wealth. This translates to increase wealth luck for everybody.

This year’s Bazi also created some hidden elements that also created two powerful stars, first, the STAR OF SCHOLASTIC BRILLIANCE and, second, the STAR OF MENTOR. Again, what does this mean? This means that leaders of the world will be able to avail to get more help in the scholastic ‘industry’ and that they may act as charismatic leader to their constituents. It will also mean that we will have lesser abusive leaders.

Now, allow me to discuss the clashing pillars that I mentioned earlier. The first clashing pillar is the year pillar. The water rules the heavenly stem, but the intrinsic element of the snake, which is the earthly stem, is fire. Water is the Feng Shui cycle of element destroys fire and fire relates to power and rank, this would mean that power and rank might not be very important this year.

The second clashing pillar if the hour pillar. Hear you’ll see that the Earth element and the Water element occupy this pillar. What this means is that the economy will tend to be bad towards the end of the year, and that those who liquid resources will have tend to survive more than those who are not very liquid. This means that we have to be prepare for the slight bump in the economy towards the end of the year.

However, since the Bazi chart of the year shows that it is sandwiched between two clashing pillars, namely the year pillar and the hour pillar, what this means is that all the good things that the pillar indicates has the potential to be a little elusive. It doesn’t mean that you won’t get it but it only means that success luck and full potential wealth luck that you can get might not be easily attainable. Unless, your Bazi has the complete 5 elements, namely – WOOD, FIRE, METAL, WATER, & EARTH.  Having the complete element will make you reach the full potential of success and wealth luck this year. 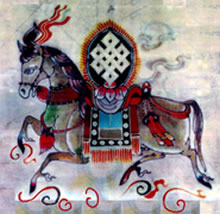 What can one do if we don’t have the complete elements in our Bazi chart? Very simple, tap the power of the Lung-Ta or the Windhorse. I’ve briefly written about this before, but will write about it further in one of my next few posts. You can put the image of the Lung – Ta or Wind Horse on your table or bedroom. Wearing the image of the Lung – Ta or Windhorse as a pendant will also ensure that you’ll get the full potential of the success and wealth luck brought about by year as indicated in it’s Bazi chart. The Lung – Ta or Wind Horse is such a powerful image whether or not we have clashing pillars or not, but it is especially helpful this year. In fact, you’ll see that most, if not all, Feng Shui consultants will recommend the Lung – Ta this year.

I’ve always recognized the power of the Lung – Ta or Wind Horse that I made sure that it’s image is included in the pendant that I designed, the WISH FULFILLING AND BUDDHA’S BLESSING MANTRA PENDANT. When I designed it last year, I really haven’t checked the Bazi of the year and didn’t realize that I will be very helpful this year. I’m just really glad that I’ve included it in the pendant. There’s no need for me or my family and friends or those who got the pendant to buy another Wind Horse pendant, which is very difficult to find, and if you can find one they are quite pricey.

Note: In my next few posts, especially, about the individual luck base on your animal sign, you’ll see a somewhat conflicting statement. Note that this is because Feng Shui is seldom just one aspect, but rather it’s a mixture of different formulas and it’s up to the analyzing it to synchronize all of it. In a later post you’ll see that having Metal and Earth in your element, might be personally bad. So does this contradict what I’ve just written now? Superficially, yes, but an annual forecast is different from an individual sign forecast, so it might create a little confusion to those who don’t really understand Feng Shui deeply.

TO HAVE A BETTER UNDERSTANDING OF THE 2013 FORECAST, PLEASE READ THE OTHER RELATED POSTS:

If you wish to know more about the following Buddhas, Bodhisattavs. Cures or Enhancers mentioned in this post. Please just click on the link. Thanks.