One of the most common question people ask me is – HOW FAST DOES AN AMULET WORK?

In Buddhism, he standard belief is that it takes 3 months to 7 months before you start to feel something that is brought about by the amulet. However, it is not totally alien for Buddhist to sometimes feel something already even before they physically get an amulet, simply the thought of acquiring an amulet and making a move to acquire it, like sending a donation, sometimes already signifies the start of your ‘relationship’ o affinity with the amulet. Furthermore, if for example a love one acquired an amulet for the purpose of giving it to somebody, sometimes the one who will receive it can already feel some changes brought about by the amulet. This is what happened to one of my readers, Cecile.

Cecile, intends to give an amulet to her sister so that she can patch things up with her mom, amongst other things, and Cecile believes that even before he sister received the Vajrapani Ruel, the miracle has already worked on them. 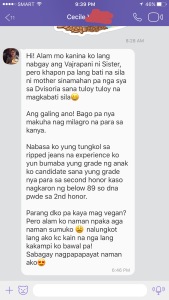 TRANSLATION OF WHAT CECILE SAID:”Hi! Do you know just it was only earlier that I was able to give the Vajrapani to my Sister, but as early as yesterday she has patch things up with my mother. In fact, she even to Divisoria with her. Isn’t it great?! Even before she get it, the miracle has already happened to her. ” – The last part of her sms she talked about my article about ripped jeans, which she suspects is the cause of the lowering of her child’s grades. Then she talked about being vegan.

The Vajrapani Ruel itself enjoys some miracles that are quite instantaneous, so even if Buddhist beliefs states that it should be about 3 months to 7 months, sometimes it can be so much faster than that, and it’s totally possible as proved by some of the personal testimonies found on this blog.

But what are the factors that makes it work faster than others?

Well, there are several factors. Belief plays a role in it, but as you can see in the post entitled – Vajrapani Ruel Stories (25): Illegal Detention and Murder Cases Against An Underdog Politician Dropped (How The Vajrapani Ruel Saved A Person Without Him Knowing)– the one who was actually helped didn’t even know that he has the Vajrapani Ruel. The Karma plays an important role also. For example, some people are bound to have a specific luck, and acquiring a powerful amulet makes it faster. Still about Karma sometimes a powerful amulet takes awhile to work because it still needs to cleanse some negative karma that serves as an hindrance to the luck that one is aspiring for. Sometimes, additional or support energies help to make things faster, such as chanting of mantras, lighting of incense or candles, etc., or even good wishes from friends or loved ones.

For the Vajrapani Ruel, I notice that going Vegetarian, especially Vegan, makes it work faster.

At the end of the day, our attitude towards the amulet contributes to the efficacy of the amulet. Note, I stated that our attitude contributes but I would like to make it clear that it’s not the determining factor because an amulet will work or not whether we believe in it or not. Especially if its a powerful amulet.