As we all know there is this calamity in Houston, Texas in USA. Hurricane Harvey brought massive rain that rivers overflowed so much that it is now officially been confirmed that it was the worst tragedy to happen in Houston in more than a century! Worst calamity in more than a 100 years! Add to that natural disaster is the disaster that it was said that the Trump US government was not ready for this calamity because of the fact that the two agencies involved in this kind of situation is at the present still unoccupied. To add to that tragedy, Joel Osteen, the Christian preacher and author of several books who has a house worth US$ 10.5 Million and has a large stadium that can fit thousand and thousands of people refuses to open its door for those who were displaced. This for me is worse than any natural disaster, for one person able to help somebody but refuses to do so.

Isn’t it ironic that two natural calamities occurred in a span of two days at two different continents and they’re both ‘record breaker’ in terms of the devastation that they brought? And these things happened both during the Hungry Ghost Month which was preceded by the total solar eclipse!

But for me the biggest tragedy is still about to happen but it has already started when North Korea fired that missile that arced over Hokkaido even it eventually fell of the ocean. It was a clear provocation against Japan and the US who is currently having a joint training. It was not clear why neither Japan and the US didn’t intercept the said missile, but speculations say they avoided being embarrassed which means that they might be ready to intercept such a close encounter. Today, (time of writing is usually not the time of posting) North Korea has announced that the Japan missile is just a prelude to a Guam missile. While this incident doesn’t seem so tragic now, political analysts are already bracing themselves for an even bigger tragedy of worldwide consequence. It is pretty obvious that with Trump at the helm of things in America, he will not like to be bullied, much less by an Asian, and for somebody like him who seems to have strong racist tendencies, he will have taken as a direct provocation. Japan will definitely have to act on this also. We just hope that cooler heads prevail coupled with wisdom and humility and that the leaders doesn’t turn this into an arm – wrestle to determine who is more macho.

I think these tragedies are what I said about the ‘catastrophe’ that will happen or start to happen on the 3rd quarter of the year. But what I’m afraid of is that there is more. I am not trying to be a prophet of doom, but modesty aside I have quite a high rate of accuracy when it comes to forecast. For example, I was the only Feng Shui writer who clearly indicated that there is going to be tragedy in Visayas that will cause famine when Typhoon Haiyan / Typhoon Yolanda happened, to the earthquake in Nepal, to the financial crisis. As early as middle of last year I Have forecasted that the US dollar would hit to more than 50 Philippine pesos. I said it might stabilize at 52 Philippine pesos but may hit as high as 54 Philippine pesos.

I’m saying these not to brag because my high rate of accuracy is not because I’m psychic but because it is of the accuracy in the interpretation of the ‘stars’ for the year, but that we should take these seriously. In the Philippines, we should also expect something to happen which is brewing already. This might ‘blow on our face’ either towards the end of the year or early next year.

And we are talking about this and saying we must take this seriously so that we can all be prepared, and we should all start praying. I believe and know that prayer works and so it is important to pray for our country and for this world.

In the meantime, on a personal level, the effect of the total solar eclipse on the eve of the Hungry Ghost Month could be some personal financial difficulty or illness. When this happens, it can continue until the end of the year. It is best to protect oneself with prayers or with powerful amulets like the Vajrapani Ruel or a gold Kalachakra pendant. My Guru Lama foreseeing this concern, has also recently released the Vaisravana – Dzambhala Wealth Amulet that is suppose to address this concern. The Vaisravana – Dzambhala Wealth Amulet is a powerful wealth amulet.

This is a Kalachakra Pendant designed by Lillian Too. She has included some mandala sands inside the pendant to make it more potent. I personally love this pendant and has one that is made of white gold. The Kalachakra Symbol is a powerful protection symbol. It is actually ten syllable mantra compressed into one symbol. The mantra is HO HAM KSHAMALA VARAYA HUM PHAT. However, it is usually chanted with OM AH HUM thus making the complete mantra as OM AH HUM HO HAM KSHAMALA VARAYA HUM PHAT. It is because off this that for the WISH FULFILLING AND BUDDHA’S BLESSING MANTRA PENDANT, I decided to put the symbolic script OM AH HUM on top of Kalachakra Symbol. 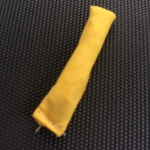