I have a lot of wonderful personal miraculous testimonies about the SPECIAL GOLD PIYAO that I haven’t written about only because I have not been writing for the long time. And also the next few articles will focus more on empowering my readers about doing their own Feng Shui. 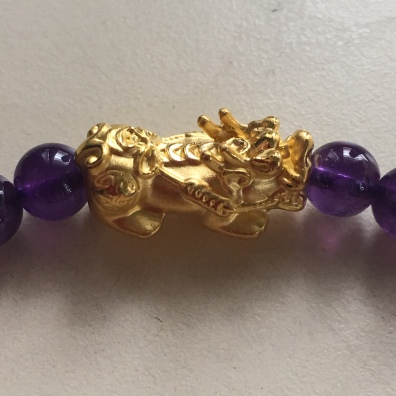 On top of the 12 ‘big’ heavenly money coin, it also has another 5 heavenly money coin on each side of the it’s harness. This further represents that the ‘owner’ of the Pi Yao can harness wealth into his or her life. On each side of its hind legs is the symbol for protection. This represents protection from earthly dangers and envious eyes, and also harmony so that one doesn’t get into a rough, hostile situation is one’s quest to simply get more financial luck to provide for one’s family. Also incorporated is the symbol for longevity to constantly provide good health 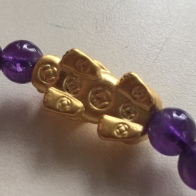 On top of that they designed the said Pi Xie’s with 12 heavenly money coins to represent wealth luck for each of the 12 lunar months. The coins are found on it’s back and also at the bottom part of the image and on his legs, so this represents that it walks on money and is need not ‘search’ for it. 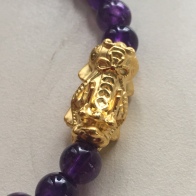 It also has fierce but still friendly face, this indicates that while you can be fierce in business or work, you will still gain the support and admiration of the people around you. This also means that you can you charm to get to your wealth luck.

This limited Special Gold Piyao has 4 horns that represents the four cardinal directions – East, West, North, and South. This means that one will be able to take by the horn the challenges to gain financial luck.

This is a special gold Piyao designed by Guru Lama and made of blessed gold.

Other than the magic inscriptions at the bottom both designs are basically the same.

Instead of only coins at the bottom of the Piyao, there are magical words that connote protection, abundance, luck, health, etc. What design one gets will depend on what one needs.So if you are a person who really need to attract money only or is in a bad financial situation, you will get the one with only the Heavenly Money Coin. However, if you already have abundance of wealth and needs only to safe guard it, or if you also need protection, and good health, and abundance in other aspect of your life, what you will get are those that have the magical inscriptions that will further bring all these aspects to your life. It is Guru Lama who determines this, thus we will request for your birthdate when you request for a Special Gold Piyao.

However, it is worth mentioning here that I find the SPECIAL GOLD PIYAO really amazing. I know that it has been copied and the copies are sold in Chinatowns here in the Philippines, Malaysia, Singapore, Thailand, and even the USA. This is what I have to say about the replicas, they are still Piyaos and it might still carry some power of a Piyao (also called or spelled as Pi Yao, Pixiu, Pi Xiu, Pixie, Pi Xie), however, you should also know that the specific design that a person needs depends on one’s birthdate, and the stones with it depends on the birthdate also. But more importantly, the SPECIAL GOLD PIYA is called special because of the gold that is used to make the SPECIAL GOLD PIYAO. These are gold donated to the temple, put under a special container under the foot of an image of a Buddha or Bodhisattva and for several years receives the power of the recitations and chanting of mantras, sutras and pujas of the Bhiksus, Bhiksunis, and high lamas like Guru Lama. I noticed also base on the testimonials of readers who acquired it and also from the confirmation of Guru Lama, that the effects of the SPECIAL GOLD PIYAO is more of immediate and instant. Indeed, one of the very first testimonial – Increase in Salary and a Bonus: A Special Wealth Luck Received By A Reader in Singapore After Wearing the Special Gold Piyao For Just One Day!  – proves that this is indeed the case. 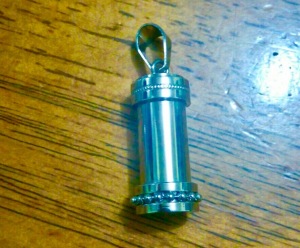 The VAISRAVANA – DZAMBHALA WEALTH AMULET as mentioned in my other articles is something more gradual. It will first establish a solid foundation and/or create wealth luck for you. This will take a little time but is good for stabilizing that kind of wealth luck or financial luck or money luck.

However, today I would like to share with you a short story about the financial shower a person may receive by combining the VAISRAVANA – DZAMBHALA WEALTH AMULET and the SPECIAL GOLD PIYAO.

I have quite a few readers who got both amulets. However, the story of one particular reader, Jubiel, stands out.

Jubiel got both the VAISRAVANA – DZAMBHALA WEALTH AMULET and the SPECIAL GOLD PIYAO at different times. But when he had both the amulets, the wealth miracle / financial miracle / money blessings that he got is simply awesome.

Allow me to share here Jubiel’s sms so that you can his testimonial yourself.

As you can see it is very amazing that a person will receive such a miracle.

Guru Lama confirmed that having both the VAISRAVANA – DZAMBHALA WEALTH AMULET and the SPECIAL GOLD PIYAO is really an amazing combination of amulets that will help make wonders.

If you want to know more about the Special Gold Piyao, please read the following posts: