In my previous post I talked about the Four Heavenly Kings, which are actually Buddhist Gods. If you haven’t read that post, I suggest go and read it first for you to truly understand this post better. Read it by clicking here.

One of the most common concern of people in the past, in the present, and I presume in the future is financial stability. In Buddhism, money is not evil; in fact, one sign of a blessed life is having money. Nevertheless, what we do with the money is what determines evil or good, but that is a topic for another post.

After some discussion, Guru Lama has told me to write about The Four Heavenly Kings and today’s post so that people will know that in the midst of what seems like a worldwide phenomenon of financial problem or struggles, there is still something that we can do so that we don’t get pulled into the mud of financial struggle. In the Philippines, a lot of people are complaining about the continuous weakening of the Philippine peso, and while we can complain and complain, in reality we should all strive to work harder, pray harder, and gather our inner strength to fight this concern.

A famous Feng Shui expert has talked about King Vaisravana or Namtose (Namthose) already, and it is largely because of this also why Guru Lama has said that I should start writing about the Four Heavenly Kings and to write this post, to really put everything in the perspective that he felt it should be written. Note though that this is just how Guru Lama wants it put and that although we don’t know in detail what was said about King Vaisravana, I’m writing it in a way that Guru Lama thinks is the best way to explain it.

Note: The post about the Four Heavenly Kings and this post have both been reviewed first by Guru Lama prior to posting.

Guru Lama felt it is only proper to talk about the Four Heavenly Kings first to disabuse the notion that in Buddhism, our gods are all about money.

In the preceding post about the Four Heavenly Kings, I mentioned that King Vaisravana the head of all the Four Heavenly Gods is wealth god himself, and that he rules over all Yaksas (also spelled as Yaksha), and amongst these Yaksas are the Dzambhalas or the Five Dzambhalas (also spelled as Dzambala, Jambhala, Jambala, Zambala, Zambhala). In this blog, I have already talked about Yellow Dzambhala and White Dzambhala, but as instructed by Guru Lama, allow me to talk about all the 5 Jambhalas again.

First, what are the Jambhalas?

Jambhala (again also spelled as Dzambhala, Dzambala, Jambala, Zambhala, Zambala) is what we call the God of Wealth or Gods of Wealth of the Buddhist. They are known 5 Dzambhala, who are member of the Jewel Family of the Buddhist tradition. Some say that Dzambhalas are manifestations of Bodhisattvas and Buddhas in Yaksha form to help people have a better grasp of their worldly powers. Each Dzambhala has its own mantra to help eliminate poverty and create financial stability.

According to Gyalten Sogdzin Rinpoche Dzambhalas are products of a Bodhisattva’s tears that turn into a Yaksha to aid sentient being to have material and spiritual wealth as well as to help have attain financial stability.

”Because in this world, there are all kinds of wrathful and negative emotions or bad spirits, and sometimes they will harm you and other sentient beings, Dzambhala must take on such a wrathful and powerful form to protect us from these harmful spirits and negative karma. Especially, Dzambhala helps us minimize or decrease all misfortunes and obstacles and helps us increase all good fortune and happiness.”

The Five Dzambhalas are Green Dzambhala, Yellow Dzambhala, White Dzambhala, Red Dzambhala, Blue or Black Dzambhala. In Buddhism and Feng Shui as well as Taoism Blue and Black are considered as the same color. 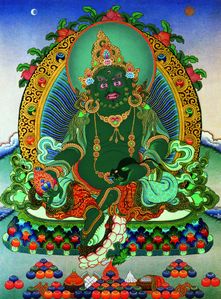 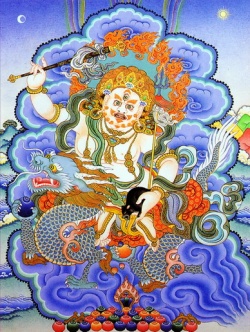 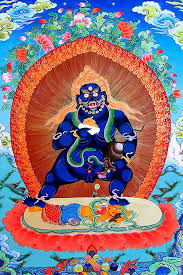 Some might consider this as a fairly young and unknown amulet, but according to Guru Lama, this perception is false, for the instructions on how to make this amulets are found in Tantric Buddhist Scriptures.

About two decades ago, when Guru Lama was much younger but who is already heading a temple as it’s Chief Abbot, he was approached by one his Sangha member (temple goer) who goes to the temple, this person is a devout Buddhist and is one of the most compassionate person Guru Lama has met. He will seldom complain, but because he goes to temple almost everyday, Guru Lama would talk to him a lot, and from there he realized that this man has lived a difficult life mostly because he was in poverty. Guru Lama seldom notices how a person dresses, it is as if he sees through the dress or clothes and will just see the person devoid of his financial status in life. But according to Guru Lama, one day this man can’t bear the hardship much longer because he was unable to pay for his wife’s hospitalization and medicines that he just cried and cried while talking to Guru Lama. According to Guru Lama, it is as if he was awakened and notices that the man’s clothes are worn out and to put it simply and directly, he does look poor.

Guru Lama set out to help the man and raise funds for him. However, he knew that this was a temporary help. And so he meditated to know what he could do for this man. In his meditative state he saw a book fell off from one of the shelves in their temple library, which according to Guru Lama was much smaller than it is now. He knew right away that he has been guided by the Buddhas and Bodhisattvas to check out this book. He remembers clearly which book ‘fell off from the shelf’ in his meditative state and so he went to check this book. Much to his dismay it was a Tantric Buddhist Scripture that can only be read by senior lamas. He was already a senior lama at that time, but a Tantric Buddhist Scripture is one of the most difficult books or books in Buddhism. But since he knew the answers could be found in those pages, he set out to read it.

Three weeks after he came across the instruction on how to make the Vaisravana – Dzambhala Wealth Amulet, and knew immediately that this what the Sangha member needs, and so following all the rules and strict guidelines, he set out to make one.

When he gave the Vaisravana – Dzambhala Wealth Amulet, which is an amulet that has to be consecrated under the Four Heavenly Kings (not just King Vaisravana) and the Five Dzambhalas, he gave him the instruction as mentioned in the Tantric Buddhist Scripture book he read, to chant the mantras of the three of the Four Heavenly Kings three times, and chant the mantra of King Vaisravana 49 times, and each of the mantra of the Five Dzambhalas 108 times.

The Sangha member followed the instruction and the rest soon became history. To this day, that Sangha member remains to be one of the wealthiest famous people in Singapore. Throughout all these years he continues to wear the Vaisravana – Dzambhala Wealth Amulet.

I’m sharing this with you because Guru Lama, after long contemplation, which started early this year, has decided to make this amulet available to the public. The Vajrapani Ruel is almost running out, meaning there are only a few pieces left, and Guru Lama felt that in these uncertain times, especially with the extreme financial stability or volatility, we can all use some help from this powerful amulet called Vaisravana – Dzambhala Wealth Amulet. It is placed in a metal case, not just for its durability and protection but according to the Tantric Buddhist Scripture book where Guru Lama got the instructions for this amulet, it has to be placed in cylindrical metal case to symbolize continuity and stability.

The Vaisavana – Dzambhala Wealth Amulet has the consecrated copies of the mantras of King Vaisravana of the Four Heavenly Kings and the mantras of the Five Dzambhalas. Furthermore, there are some special ingredients in powder form that are included to add to the potency of the amulet. Before it is sealed it is furthered consecrated on the image of The Four Heavenly Kings.

Like any other amulets, the stipulated donation for this amulet will go to the feeding of the monks, building of temples, or making an image of a Buddha or a Bodhisattva. To understand further on acquiring an amulet, I suggest you read the post – The Evolution of Acquiring An Amulet.