A reader emailed me in response to my post about THE LAST SUPPER being a bad Feng Shui image. For those who are not familiar with it, please click on the title of the post so that you can understand what we are talking about here.

I did not alter any of his statement and is posting them here verbatim. I have inserted ( ) wherein I felt the word needs clarification.

Enjoyed all your post and will continue to do so.

I’m a born Roman Catholic but I’ve come to practice Buddhism at the same time.

So my humble take with regards to the last supper and feng shui:

1. Different ppl (people) interpret art differently.  One man may say, betrayal, sorrow, pain ets.. Another may say good or bad family is family no matter what, others may say well that sacrifice was  a pivotal part of history to which we would now not be enjoying what we have. Also there’s the artist take on what he wanted to depict and why.

A question if you don’t mind, what happens if a good feng shui item which does good but makes the owner doubtful or perhaps a painting that makes him sad or fearful?

But I must agree with you that if the general consensus in an area or the owner has a negative interpretation  about something it’s best removed.

If something brings a positively reinforced feeling then surely it can do no harm.

Growing up I feared the look of certain Buddhas due to wrathful appearance and different peoples opinion but having come to understand for myself I have come to find I’m no longer fearful instead I see why and the beauty of it.

In the end, it is my humble belief that much more than beauty lies in the eye of the beholder.

TP, the reader who sent me this email raised some valid points that are totally worth considering.

I also would like to share that I did get a lot of email and text messages informing me that since they had their image of THE LAST SUPPER, they or their family did experience a lot of betrayal. If you remember BM, she is somebody that I have written about several times on this blog. She has a beautiful wood carving of THE LAST SUPPER and she said that true enough she experienced betrayals from her staff, from people that she nurtured and taken care of. While these betrayals are not bad enough to ruin her business, for BM it hurt more because she sincerely cared for these people. Another reader also emailed me that they were a happy family until the father had a fling, she felt betrayed, and she said the relationship they found out started about a year ago. She said they have a fairly new image of THE LAST SUPPER that they bought in Italy about 18 months ago. (Please note that date of posting does not necessarily reflect date of writing.)

A lot of people were asking me also on what to do with the image of THE LAST SUPPER. Most people would want to take it off. But what to do with it? I suggest donating it to a church or religious institutions.

However, one particular reader still lives with her parents and she can’t take it out because her mom does not believe in Feng Shui. If this is the case, I suggest putting a powerful protective amulet behind the image, such as the Vajrapani Ruel, Surangama Mantra Amulet, or the Kalachakra.

Pure Land Buddhists believes that when you wear a Surangama Mantra Amulet, heavenly beings that has an affinity with you will hover over you. 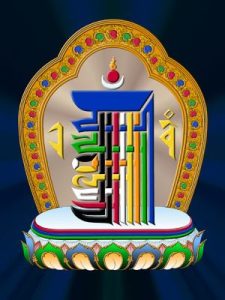 The Kalachakra Symbol is a powerful protection symbol. It is actually ten syllable mantra compressed into one symbol. The mantra is HO HAM KSHAMALA VARAYA HUM PHAT. However, it is usually chanted with OM AH HUM thus making the complete mantra as OM AH HUM HO HAM KSHAMALA VARAYA HUM PHAT. It is because off this that I decided to put the symbolic script OM AH HUM on top of Kalachakra Symbol.