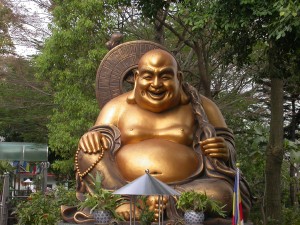 Buddhist scriptures states that we are currently under the ‘era’ of Sakyamuni Buddha, which is the fourth Buddha to have appeared on earth, there have been 3 others before him. It is said that his arrival will be at the time of the low point of human existence. He will come at a time where in mankind has forgotten about the Dharma (Buddhist teachings). This is not totally impossible because as shown in what is happening in Tibet, under the rule of China, the original Dharma is being purged and destroyed, albeit with extreme resistance from Tibetans and other Buddhists, but unfortunately, still with a lot of success. This answers why even after several recitations of Mantras it is still bound to happen, because it was prophesied in the Buddhist scriptures. In China, Buddhism has really taken a lot of different interpretations that are watered down. Buddhism, as any other religion in China, is closely monitored and censored by the government. Same thing is currently happening in other parts of Asia, such as Myanmar.

Going back to Maitreya Buddha or Happy Fat Buddha as he is normally called, is said to come when mankind is in need to be reminded of the Dharma. At present Maitreya Buddha is at present said to be living in Tusita Heaven, a celestial place where celestial Bodhisattvas are said to reside. In Tusita Heaven, it is said in the Buddhist scriptures, Maitreya Buddha constantly recites mantras and sutras for us. He also continuously gets lessons in preparation for his coming to earth where he’ll achieve enlightenment within 7 days and become a Buddha so that he can impart to us the Dharma.

Typically pictured seated on a throne either cross legged or feet flat on the floor, signifying that he’s waiting for his time, Maitreya is originally pictured as a slim, handsome prince. He is also usually dressed as a Indian royalty (India being the origin of Buddhism). As representation of him being a Bodhisattva, it is not uncommon to see that he is also adorned with jewels. A Khata is usually tied around his waist much like a belt.

Another representation of Maitreya Budda.

The idea of him pictured as a Happy Fat Buddha came about of what he represents. The Maitreya Buddha represents wealth, health, love, happiness or joy, success, peace, and harmony. In short, he represents what each person aspire for.

There are several stories as to why the image of Maitreya Buddha became that of the Happy Fat Buddha or Laughing Buddha. In fact, Maitreya is derived from Maitri which means Loving Kindness.

One of the story states that the image of the Happy Fat Buddha came about because of the Chinese buddhist monk Budai. Budai either claimed or people saw in him the qualities of Maitreya Buddha (the written history about this are not clear) that when he passed away people started using his image as the image of Maitreya Buddha.

Another story claims that Maitreya one day visited earth to share the sutras, however, all the women are unable to absorb his teachings because all they can see is a very handsome young prince and they fell in-love with him. Seeing that his image causes women to be distracted he transformed himself to a fat bald man.

Still another story is quite simple. When Buddhism was introduced in China, they’re unable to comprehend some aspect of the teachings of Buddhism. For example, Kuan Yin is a female representation of Avalokitesvara, the ‘Male’ Buddha of Compassion. However, Chinese are unable to comprehend the idea of a very loving, gentle, compassionate MALE being,  to make it easier for the people to understand the character and teachings of Avalokitesvara, they decided to represent her with a female image called Kuan Yin or Kwan Sheer Yin (He or She who hears the cries of the world). Allow me to briefly share here that it is said that it is Avalokitesvara himself who instructed some Indian and Tibetan monks through a vision to represent him as Kuan Yin. This is not totally veering away from reality, because in truth, celestial Buddhist gods are androgynous, they are neither male or female, or it can be said they are both male and female. Since at that time Chinese always associates wealth and health with plumpness, and happiness, love, harmony with a happy face, these characteristics became the representation of Maitreya Buddha in China.

Personally, I believe that the 3rd story is the most plausible explanation.

When I come across a big image of the Maitreya Buddha as a the Happy Fat Buddha or Laughing Buddha, or when I pray to him, I usually rub his stomach to signify the asking of blessing. It’s an affectionate gesture. However, never touch the head of a Buddha, because in Buddhism it is only monks, your elders or superiors who can touch the head of a person who is ‘beneath’ them.

Most of the images of the Happy Fat Buddha depicts him on a relax mode. There’s another image of him on his legs. Either of the two images are considered very auspicious.

Placing the image of Maitreya Buddha, either as the handsome young prince or as the Happy Fat Buddha or Laughing Buddha helps generate his blessings of happiness, harmony, love, peace, wealth, good health, etc. However, in the Philippines it is easier to get his image as the Laughing Buddha. Also this particular image also gives a psychological effect for all those who see it. It reminds us to be happy, it reminds us to become positive, and at the very least, because of how he looks as the Happy Fat Buddha, it creates an atmosphere of happiness and harmony.

You can place his image either on your altar, or any parts of your house except in the bedroom (for married couples) and or in the rest room. 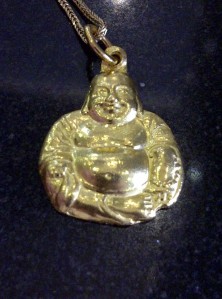 This is from my personal collection. I wear this pendant everyday. In choosing an image of the Happy Fat Buddha to be worn as a pendant, always look for the face. Make sure that it has happy jolly face.

Wearing an image of the Maitreya Buddha as a pendant is also very auspicious and serves as an homage to him. In return, you get to tap into his blessings.

When I was designing the WISH FULFILLING AND BUDDHA’S BLESSING MANTRA PENDANT, a pendant that I initially designed for myself and for my family but has since then become a popular charm for my readers garnering a lot of very positive personal testimonies, my frustration is not having enough space to include the image of the Happy Fat Buddha. However, since I have a separate Happy Fat Buddha pendant I see no need to include. I’m just happy that the WISH FULFILLING AND BUDDHA’S BLESSING MANTRA PENDANT has since then become an instrument of good luck to a lot of my readers.

27 comments on “The Happy Fat Buddha: A Representation of Maitreya Buddha’s Blessings”

Pingback: 29 Signs You Were Raised By Hippies | EchoBrown